Arroyo High School in San Lorenzo, across the bay from San Francisco, has a high diversity student body of approximately 1,800 students. It is organized into several “schools within a school,” and this is the 9th consecutive year that I have spoken to its 10th grade students studying the Holocaust.  This year, however, it was unfortunately not face-to-face but via the internet and Zoom, with each student at their computer at home, because the ongoing COVID-19 pandemic restricted all of us to our homes.  Looking at my web posts of previous visits to Arroyo, with dozens & dozens of photos of students and remembering the brief but memorable chats with students & teachers, I look forward to a real rather than virtual visit to Arroyo next year.

This year’s virtual “visit” was organized by teacher Jess Vaughn, who had participated in several of my previous visits to Arroyo, and I was truly impressed by the quality of the students’ questions: they were perceptive, sensitive, and mature.  I view students’ questions as a reflection not only of the students themselves but also of the teaching, so it was obvious that Jess Vaughn prepared her class very well.  (In Student Questions, most of the dozen from #3 thru #14 were asked at this session.)

The event was arranged by Penny Savryn, Program Coordinator of the JFCS Holocaust Center.

If Mr. Elbaum could give advice to the world about how to deal with hate and prejudice, what would he say?  I don’t think that hate and prejudice can be eliminated totally as these are part of human nature, despite 6000+ years of civilization, but each of us can do our share to decrease them by following the Golden Rule, which is treating others as we would want to be treated, and by raising our children to do the same.

I honestly thought that the ghettos were more comfortable and habitable than what George explained, but when he told us there were starving people and people dying then it definitely changed my mind.

Hearing his story being told by himself was a very fulfilling experience and I think what he does is great.

It definitely helps me have more empathy for survivors of the Holocaust. They experienced years of pain and suffering that no human being should ever have to go through. I’m very appreciative of Mr. Elbaum for taking time out of his life to share his experiences with us.

How hard was it to start a new life?  Since I was moved as a child from one family of strangers to another, starting a “new life” was traumatic the first few times, and then it became almost a “normal” part of my life.  That pattern continued until I came to America in 1949.

Terrible moments in history like the Holocaust, should never, ever be repeated again in the future.  (Unfortunately, “should” has little meaning in history of mankind.)

How does his experience with the Holocaust affect his everyday life?  The title of my book, “Neither Yesterdays Nor Tomorrows”, answers this question: as a child I learned instinctively to forget the pains of Yesterdays and not to look to Tomorrows because I never knew when or whether I would see my mother again.  I therefore focus on the today, knowing from experience that I will address tomorrow when it arrives.

His mother dyed her hair blond so she wouldn’t be suspected of being Jewish.  I wonder if that was painful for her to see part of her identity leave?  Did she feel empty?  Whereas I had never asked her about this specifically, I suspect that she focused on its necessity for survival rather than a feeling of “identity”.  I’ve been asked a similar question about having to change my last name several times, and I apparently learned for emotional survival that my identity was not in my last name but what’s inside of me.

Learning about Mr Elbaum’s story shows me that the strength resides in your ability to be resilient and strive for change.

This helps me understand that thing was not a joke and people died for nothing.  (I presume “that thing” means the Holocaust, and I am stunned!)

Learning his story affects the way I see the world because it shows how demonic the world can really be.  I know that the Holocaust was a long time ago, but glimpses of it are still present in the world today, such as discrimination, racism, hatred.

It makes me wonder how people can be so cruel, and how people can be so dehumanizing with no everlasting effect on how they are to society or how their ideas aren’t rejected.  (Apparently one can find kindred spirits in kindness & charity, but also in cruelty & prejudice.)

By learning Mr. Elbaum’s story, I am able to see the great lengths that a guardian may go for the well-being of their child as well as the strength one must obtain under such challenging times. (These words would have pleased my mother very, very much!)

Humans can be easily corrupted under the sense of false superiority; the lust for power can drive a person to forgo their morals and undertake inhumane actions.  There are times where anyone can lose sight of their path, blinded by the aspirations of others.

The meeting was very meaningful.  As a person, I see that there is more to life and only so much time.  I plan to make the most out of life, even if there are others that do not wish the same for me.  The world can be cruel, yet kindness and care prevail.

I would have liked to have more time and listen to more of George’s story.

I am grateful that our English class got to hear him speak about his very heartfelt experience.  Telling a story about a traumatic event in history must be hard, so I appreciate him for that.

It helps me to understand that prejudice towards a certain race, religion, or community is not acceptable.

After learning his story, it changed the way I saw children in different societies.  I understood that most families have different luxuries and lifestyles, but seeing what other children had to go through without choice, makes me feel spoiled and very lucky to be in my position.

How long did it take Mr. Elbaum and other survivors to finally speak on this very hard topic and what made them want to do it?  It took me 65 years from the end of the war till I could write my book and start speaking about the Holocaust, and it was a documentary film, “Paper Clips,” that made me realize that my story has value.  I was then surprised to learn that most survivors who do it, do so only when old.

I was moved by your story and I admire your resolve and your golden rule to treat others with respect like you would like to be treated.

Thinking that my generation may be the last to hear from a Holocaust survivor such as yourself make me want to hold on to your story.  History repeats itself when old events are forgotten, and I do not want the atrocities spoken of to happen in the future.  Keep doing what you do, I appreciate you and I think you inspire everyone you share your story with.

Thank you for speaking to our class about your experience during the Holocaust and how it affected you.  People like you are what inspire change in the world.

You’ve been through a lot of hardship, yet you use those experiences to grow and to teach others.  Some people who have been through difficult situations may not learn from them, they just stew or take their pain out on others and that’s the exact opposite of what you have done.

Many people try to deny that racism and oppression still exists, but it does.  We need to constantly have conversations about it so that we can move forward.  People like you inspire my generation to stand up for what we know is right. 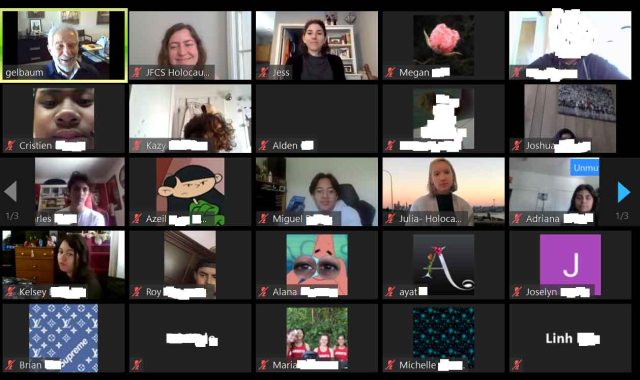