Manny’s in the Mission is an unusual San Francisco institution which prides itself on being “a people powered and community focused meeting and learning place which combines a restaurant, political bookshop, and civic events space.”  Its stated goal is “to create a central and affordable place to become a better informed and more involved citizen.”  In addition to hosting its own civic and arts related programming, Manny’s offers its events space to nonprofits, activists, and civic organizations to do their work.

Today was International Holocaust Remembrance Day, the 75th anniversary of the 1945 liberation of Auschwitz-Birkenau concentration camp where the Nazis murdered 1.1 million people, of which 960,000 were Jews.  To commemorate it, the JFCS Holocaust Center organized my presentation at Manny’s.  The Holocaust Center advertised the event to the entire JFCS Holocaust Center community, including young professionals, descendants of Holocaust survivors, parents/families, and the Bay Area community in general.  As a result, approximately 100 people came to the event and filled Manny’s meeting space with standing room only for latecomers.  I was very gratified when, after my talk, many people, young and old alike, approached me to share their family’s history involving the Holocaust.

The event’s successful city-wide promotion was organized by Penny Savryn, Program Coordinator, JFCS Holocaust Center, while all venue-related matters were managed by Jack Boger, a volunteer and friend of Manny’s.  Friends who came at my invitation were Vicki Buder, American Technion Society (ATS) Senior Director of Development for the San Francisco Bay Area, Yonatan Melamed, ATS Associate Director of Development for the SF Bay Area, Ziv Lautman, a Board Member of the local ATS chapter, and Beate Boultinghouse, a local friend for many years, and of course my wife, Mimi Jensen. 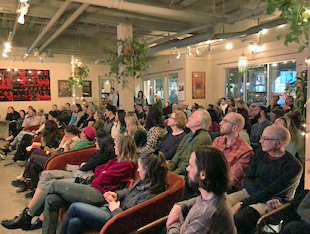 Portrait by a young attendee

with Vicki Buder and my wife, Mimi Jensen

with Vicki Buder and Yonatan Melamed