Roosevelt High School (RHS) was opened in 1922 and named after President Theodore Roosevelt, and with current enrollment of more than 1700 students it ranks as 2nd largest public high school in Seattle.  According to Best Schools, its student body is 31% minority and 12% economically disadvantaged, yet it rates #9 in Seattle and #11 in Washington with a graduation rate of 91%, with 67% math proficiency and 50% reading proficiency vs. 40% state average for both, and with 60% of its students passing one or more AP exams (9-12 grade).

RHS has the only full-time drama program in the Seattle School District and is the home to a highly renowned FIRST Robotic Competition team, the Iron Riders, which is a student-run club offering experience in constructing robots to compete in yearly competitions.  The club focuses on building a team environment and provides an opportunity for students in variety of career paths, including STEM fields, business and administration.

The audience for my talk was composed of approximately 650 students from 9th through 12th grades, most of whom have studied the Holocaust and read such books as Maus, Night, and The Diary of a Young Girl.  The event was organized by ELA teachers, Holly Cotton Howe (to whose class of English learners in Seattle World School I spoke 2 years ago) and Carolyn Hall.  What I most remember about the talk is that during the Q & A I was asked a specific question about my feelings that had not been asked in the 240 talks I’ve given to date, a question that I had to dig deeply into myself to answer, and I always appreciate that.  Arrangements for the talk were made for me by Julia Thompson, Education Resource Coordinator, Holocaust Center for Humanity. 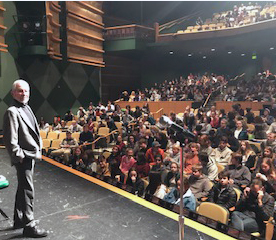 with students Alec, Naomi and Cole 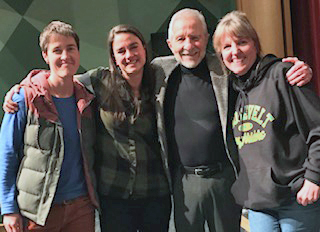