Siedlce is a city 57 miles east of Warsaw with a current population of 76,600.  In 1939, the eve of WWII, its population was 40,500, of which 15,000 were Jews.  In 1940 the Nazis deported over a thousand Jews from elsewhere in Poland to Siedlce, and in March 1941 (still before the formal decision to implement the “Final Solution”), Nazi Orpo (military police) battalions rampaged for three days in Siedlce, killing Jews. Five months later Jews were forced into the new Siedlce ghetto, which consisted of several small city blocks in the city center, and in early October 1941 the ghetto was closed, cut off from the outside world.  Conditions were appalling: epidemics of typhus and scarlet fever raged. Then in August 1942 some 10,000 Siedlce Jews were deported to Treblinka and murdered there together with a similar number of Jews from three nearby transit ghettos.  Hundreds of Jews were shot on the spot during house-to-house searches, along with staff and patients of the Jewish hospital.  1,500 Jews were temporarily spared death in order to continue supplying slave labor, and then deported to Treblinka for extermination a few months later.  Siedlce has a sad history indeed!

In contrast to this sad history, Siedlce is now a cultural hub for the entire province, with festivals, exhibitions, concerts of country-wide significance, museums, public libraries, the Culture and Art Center (CKiS) and the Municipal Cultural Centre (MOK).  The city also has an art gallery located at the University with a painting by El Greco “The Ecstasy of St. Francis”, the only El Greco painting in Poland.

The Queen Jadwiga 2nd High School in Siedlce, so-called “Królówka”  has an enrollment of 300 students, and it participated in the School of Dialogue Program in spring semester 2019.  The school participates in the prestigious International Baccalaureate (IB) Diploma Programme which facilitates entry for its graduates to the finest universities worldwide.  The Queen Jadwiga High School was established in 1904 as a single-sex trade school for girls. It cooperates with universities in Sieldce and Warsaw and participates in various international exchanges and projects about history and social life.

The school’s Vice Principal (and School of Dialogue coordinator) is Małgorzata Kotarska, who could not be present but had made all arrangements for the presentation, which was attended by 90 students.   School personnel in attendance were Principal Agnieszka Borkowska, Vice Principal Tadeusz Koczoń, and teachers Dorota Gawryluk (Life Sciences) and Katarzyna Głuchowska (English language).

The Forum for Dialogue’s Olga Kaczmarek and Agnieszka Mierzwa accompanied me to Siedlce and provided translation as needed. 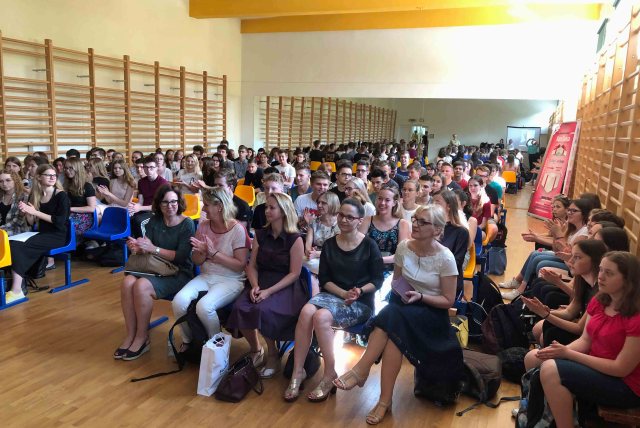 flowers and books from Hubert, Julia, Angelika and Kinga

1with flowers, Karolina and Urszula

I enjoyed our chat

Logo of “Path of Life” group