Pułtusk, a town 43 miles north of Warsaw with a current population of about 19,000, has existed since at least the 10th century.  It’s one of the oldest cities in Poland, and due to its Italian-influenced architecture, canals and floating gondolas it became known as “Little Polish Venice”.  The favorable placement of the town on the Narew River, where grain and other goods were transported to the port of Gdańsk on the Baltic Sea, contributed to the town’s growth and importance.  On the other hand, during the millennium of its existence Pułtusk was possibly the most invaded town in Poland.  Despite the extent of the destruction, especially during World War II, the town has been reconstructed and is now one of the most recognized and admired tourist destinations in the region because of its historical and unique architecture.  Before the start of World War II Pultusk’s Jewish population was about half of the town’s total 15,000.  However, on September 7, 1939 the town came under the control of the Nazis who, within the month, deported the town’s Jews to concentration camps from which none ever returned.

The Tadeusz Kosciuszko 3rd Public Elementary School in Pultusk has an enrollment of ca. 700 students in grades 1 to 8.  The school was established immediately after World War II in a former court building, and it has been quite active in educating its students about tolerance and history, including its current participation in the School of Dialogue program.  The School of Dialogue program at Pultusk is coordinated by English teacher Sylwia Narwojsz, who also organized my talk which was attended by 50 students in grades 7 and 8.  Also in attendance were Małgorzata Załoga, supporting teacher in primary education, librarian Malgorzata Grzesiak, and Aneta Szymańska, a Leader of Dialogue from Pułtusk whose efforts are focused on discovering and restoring Jewish heritage in the region – she  invited us to lunch on our next visit to Pultusk, and considering her tremendous enthusiasm, how could I but accept 😊!  The Forum for Dialogue’s Marta Usiekniewicz and Hanna Gospodarczyk accompanied me to Pultusk and provided translation as needed.

the school’s welcome, with Aneta Szymanska – Thank You! 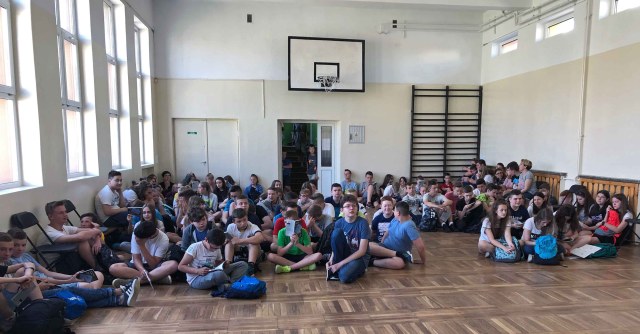 after the talk, with Aneta Szymanska, Sylwia Narwojcz and Malgorzata Zaloga

starting the talk with Marta Usiekniewicz

and even diploma signing!