Anti-Defamation League (ADL) New England Youth Congress is an annual event designed to stimulate, educate and inspire attending students to speak up and speak out when they encounter ethnic, racial, religious, and cultural prejudice.  The event is co-named A WORLD OF DIFFERENCE Institute.  2019 was the ADL New England 25th anniversary of its first Annual Youth Congress, and this year it was attended by 1500 students from 82 middle and high schools throughout Massachusetts, Vermont, New Hampshire and Connecticut.   For its young audience the event itself was preceded by Grooversity Brazilian drum band, and it was opened by Deb Shalom and Robert Trestan, ADL New England Regional Board Chair and Regional Director respectively.  They were followed by Birukti Tsige, a student activist, then Josh Zakim, Boston City Councilor, and then my keynote presentation.  Final presenters at the podium were Phil Fogelman, Danika Manso-Brown and Karen Schwartz, ADL New England Education Director and Associate Directors.  For the following 2 hours the students attended breakout workshops in assigned groups (see photos below) to discuss the nature and impact of prejudice and steps that we can take to counter it.  Lunch, raffle drawing and closing remarks concluded the event.

My participation in the event was arranged by Judi Bohn and Jeff Smith of Facing History and Ourselves, who attended it.

(To add your first name instead of the ??? in a photo’s caption, go to “Leave a comment” at the end of photos and send your photo’s number #, your first name, and your left-to-right position on the photo, not counting me) 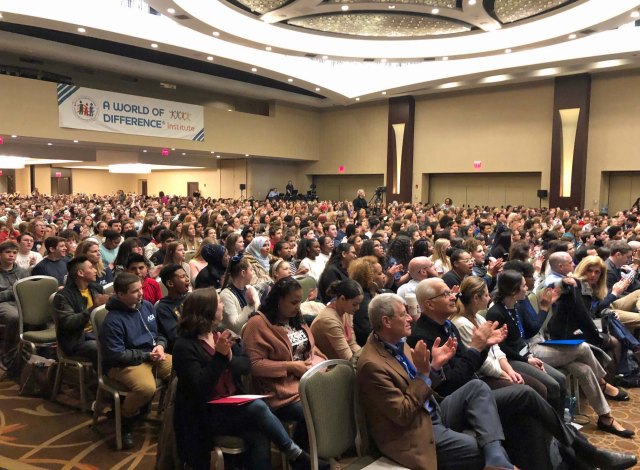 with Board Chair Deb Shalom