Lowell High School is a public magnet school which opened in 1856 and is the oldest public high school west of the Mississippi.  With enrollment of approximately 2,600 students (57% Asian, 15% White, 10% Hispanic, 8% Filipino, and 10% all other) it is one of only two public schools in San Francisco that is permitted to admit only students who meet special admission requirements.  The Lowell admission process is competitive and based on a combination of standardized test scores, GPA, a writing sample, and extracurricular activities.  As a result, its students’ test scores have historically ranked among the Top 10 Public Schools in California.  (Recent SAT scores: Critical Reading 595 vs. 495 CA average; Writing 594 vs. 484 CA avg., Math 636 vs. 500 CA avg.)  Lowell was therefore named a California Distinguished School 7 times, National Blue Ribbon School 4 times, and is currently ranked 96th by U.S. News & World Report in its “Best High Schools in America” for 2018, making it the 2nd highest ranking school in California with over 2,000 students.  Lowell was also ranked 49th by Newsweek‘s America’s Best High Schools 2012 list and 66th by Newsweek’s 2013 list.

In addition to its stellar academic performance, Lowell has one of the most active student bodies in San Francisco, with over 84 academic organizations, athletic teams and student interest clubs.  In athletics,  Lowell has competitive teams in 17 sports plus cheerleading, and these teams claim more city championships than any other public high school in San Francisco.

My talk was part of the World War II unit of the Modern World History Class taken by mostly freshman, and occasionally sophomore students.  For a couple of the teachers, the talk also served as a kick-off for a class project where students went home and interviewed their own family members about the family history related to conflicts which have occurred in the 20th century.  For the majority of the Modern World History students the talk served as a potent illustration that history is about the lives of real people and that the choices which individuals make have long repercussions in the lives of others.

Several days after my March 18 talk at Lowell High School, teacher Erin Hanlon, who organized the event, gathered together 240 letters and hand-made thank-you notes from the attending students and mailed these to me in 4 large manila envelopes.  However, by the time these arrived in our mailbox we had already left for 2+ weeks in New York and Boston.  Since I gave 9 talks in Boston, then a couple in the Bay Area and visited Seattle where I gave 3 more talks, I was totally occupied in posting these 15 talks.  Thus it was only a few days ago that I finally had the time to open the first of the 4 large envelopes and, with my wife Mimi, launched into the task of reading the students’ letters and notes it contained.  Since then, we’ve opened one large envelope at a time, and as has been our habit over the years, Mimi would read each note or letter aloud while I would listen and absorb each student’s words, and we would highlight those phrases and sentences that most resonated with us, eventually adding these highlighted excerpts (below) to this post.  Since many students drew or painted fanciful, funny, and imaginative drawings on their notes, we photographed some of these and added the photos following the event photos below.

— a student: Definitely a good read if you want to understand struggles.

–-creative student: A wonderful understanding of conflict within everything in life.

–person who loves desserts: It made me want to experience the enjoyment of a cube of sugar.

–creative student again: George Elbaum is an inspiring model of a person who experiences the   adventure of danger within history itself (end of script). 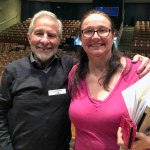 with Mirjana Campolongo, Technical Director who made the AV run smoothly

Brian Fong with message to me

Thank You notes from students