Pacifica-Daly City Democrats Club – It started with a Letter to the Editor which I sent to the San Francisco Chronicle.  It was published January 6, 2019 (photo below) and read subsequently by Connie Menefee, the Club’s President.  A week later she emailed me and invited me on behalf of the Club’s Executive Board to speak at their next monthly meeting.  I informed her that I speak primarily to high school audiences because the students are “old enough to understand, yet young enough to have an open mind,” and learning that, she took the initiative to arrange the 10th grade enriched English class of Pacifica’s Terra Nova High School to attend my talk, even though the Club’s meeting would be on a Saturday morning.  The meeting’s venue at the Sharp Park Golf Course Restaurant and a student-discounted breakfast might have clinched the deal with Alyssa Jenkins, Head of Terra Nova’s English Department.  While Ms. Jenkins could not attend, 40 of her students arrived as scheduled, accompanied by Janet Pon, mother of two of the students.

After ending my talk, two situations occurred that surprised me.  During the Q&A, several of the club members, some my age and some older, stood up and offered their own Holocaust-related memories. One spoke of his father, a tough US Army sergeant in WWII who was fluent in German, served as a translator for Gen. George Patton during Patton’s visit to a just-liberated concentration camp, and the horrors they saw during that visit haunted him for the rest of his life.  Another member, in his 90s, described receiving a post card from a relative in Lithuania shortly before the Nazis overran it, and sadly, no communication thereafter.

A pleasant surprise afterwards was that Connie Menefee and I are both aviation buffs, which led to a very enjoyable discussion.  It started because Connie’s email address includes the names of 2 great airliners, and led to her father who owned and flew several unique and/or antique airplanes, and whose obituary was titled “The Man Who Loved to Fly.” When she identified these airplanes I asked for photos, and 2 of them are shown below.

Emails from the Audience

Shortly after my talk I received several emails from the audience, which I much appreciated.  Below are two excerpts from these emails. 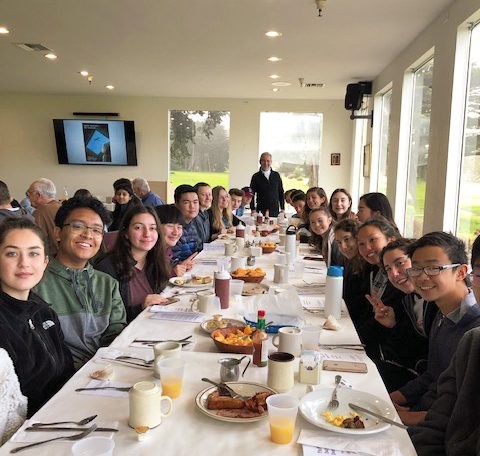 with Janet Pon and daughters Rose and Helene

with Helene, Rose, Joe and Anna

my Letter to the Editor, SF Chronicle