Grojec is a town approximately 25 miles south of Warsaw with a current population of 15,000.  Prior to the Nazi invasion in 1939, its population of 11,000 was 50% Jewish, and in the preceding century it had been up to 60%.  In July 1940, the Nazis established a Jewish ghetto in Grójec to confine its Jewish population and liquidated it in September 1942, when all its 5,200–6,000 inhabitants were transported in cattle cars to the Warsaw Ghetto.  From there, most inmates were sent to Treblinka extermination camp and their death.  Today there are no Jews in Grojec.

It is because of this history that in 2013, the Forum for Dialogue started educating student volunteers from the Public Junior High School in Grojec named after Cardinal Stefan Wyszynski (nicknamed the Primate of the Millennium) about the town’s Jewish past, its inhabitants and their life, including the school, synagogue, cemetery and homes.  This education consisted of the usual 4 one-day sessions over a month’s period and included the students’ own research and a project commemorating the Jewish history of their town.  It also included inviting and guiding a group of their friends or family and neighbors through these very sites and eventually groups of foreign visitors, usually Jewish groups, which the Forum would bring to Grojec.

Our visit to the Grojec school was the 3rd of the school talks arranged for me by the Forum for Dialogue, and our guide/escort/translator and companion to Grojec was its Director of International Relations Olga Kaczmarek, with whom I’d been communicating by email for 6 months but had never met until this morning.  (“Yes, you really do exist!” we both must have said or at least thought at that moment.)  The school visit started with my talk (and students Marta, Natalia, Paulina, Ola and Filip reading chapters from my book, newly translated by the Forum into Polish), followed by book signing and photos.  Then most of the group, including my wife Mimi, son Jordan and his wife Rebecca, went on an hour+ walking tour of the Jewish heritage sites in Grojec, including the site of the former Jewish cemetery.   Afterwards, Mimi told me that within the site of the cemetery stands a monument to the town’s victims of the Holocaust, where Marta beautifully and emotionally recited a Holocaust poem by Alf Hutchison, which concluded the tour.  (At Mimi’s request, after returning to the school Marta repeated the powerful poem to me and gave us a copy.)

I could not go on the tour because of recent surgery, so together with Olga Kaczmarek and students Filip, Paulina and Daria we stayed behind in the school and had a very stimulating discussion that ranged from the current political and academic situations in Poland and America to deep philosophical and personal issues, such as Daria’s question, “What is your personal view of the purpose of life?” which both she and I addressed.  This very meaningful discussion ended on a very sweet note when I was presented with a double portion of my very favorite pastry, homemade Polish cheesecake.  (Being a devoted husband, I ate only one portion, saving the other for Mimi, and she, a devoted wife, ate only half of her portion and gave the other half to me.)

Our full and fulfilling day in Grojec was organized by teacher Malgorzata Andrychowicz, whom I had met at the Leaders of Forum evening on May 26, supported by Anna Desponds, a Forum Educator, and teachers Wieslawa Swiader and Magdalena Czerwaty. 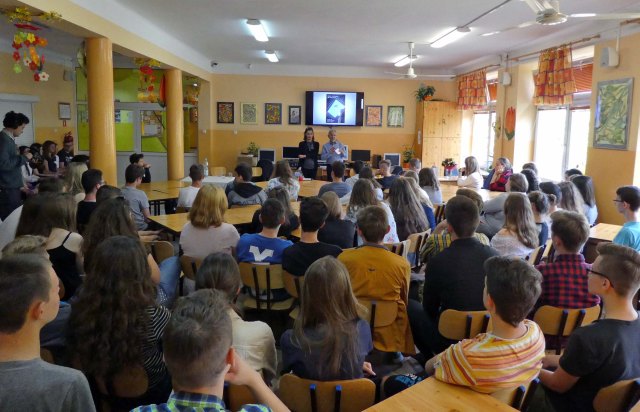 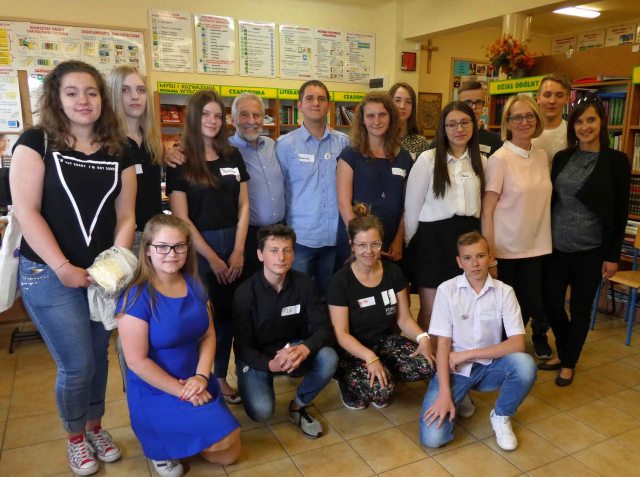 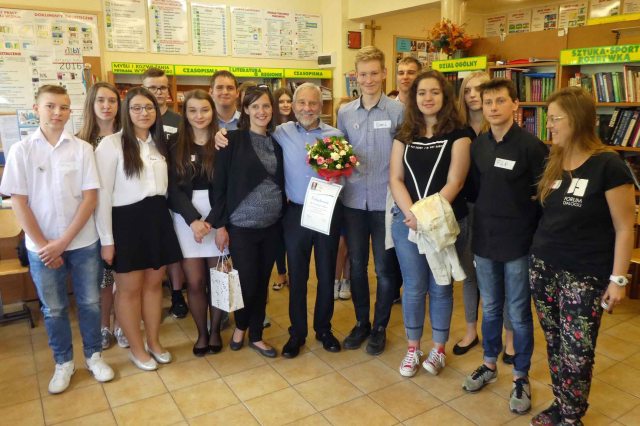 with Dominik, Patryk, Kuba and Jakub

with Jakub, teachers Magdalena Czerwaty and Anna Desponds (on right), and Olga Kaczmarek and teacher Malgorzata Andrychowicz enjoying a laugh (on left)

with Dawid – thanks for taking photos