Monte Vista High School (MVHigh) is a 9-12 public school with a student body of almost 2500 students which is 61% Caucasian, 21% Asian, 9% Hispanic, and 9% for all others.  The school has a strong focus on academic excellence, which resulted in significantly increasing SAT scores for the last 3 years consecutively, and it’s therefore a 4-time California Distinguished School and a National Blue Ribbon School.   MVHigh even has College Connect, which allows students to enroll in a shortened high school schedule to attend college courses in their 11th and 12th grades and complete up to 30 units aligned with UC and CSU requirements.  Thus 96% of graduating students attend either a 4-year college or a 2-year college.  Athletics are not short-changed by academics, with MVHigh teams winning league and even state championships in 2016-2017 in half-dozen sports.

MVHigh is also responsive to student initiatives, as I witnessed regarding my talk.  One of its students, Alexander (Sasha) Shvakel, attended a talk I gave last year at the Contemporary Jewish Museum in San Francisco, and afterwards he contacted me and asked if I would be willing to do it at his school in Danville.  I agreed, and he took it upon himself to bring me to MVHigh.  Relying on his energy and diplomacy, he obviously succeeded… TWICE: first in March and now with his history teacher Nick Jones.

Nick is also the school’s basketball coach, and a photo in his classroom shows his 2014 team which won the California Division 1 State Championship.  Pointing to the photo, Nick told me that the tall player in the back row is Spencer Rust, MVP of the East Bay Athletic League that year, and who just graduated from MIT, my alma mater!  Nick’s students were well prepared for my talk, which resulted in a very active Q & A session with historical questions about the Holocaust as well as about societal situations and bigotry in the current political climate.  Some of their questions were asked for the very 1st or 2nd time in the 200 talks I’ve given in the past 8 years.

My genuine thanks to both Nick Jones and Alexander Shvakel, and also to Tracy Johnson, MVHigh staff, for her timely “guidance” of a traffic-worn traveler.  Attending my talk was also teacher Alison Perusso, who organized my talk at MVHigh last March.

A week+ after my talk at Monte Vista I received a large envelope containing Thank You letters from the students.  Last evening after dinner, as has been our custom, my wife Mimi and I read these letters together, with Mimi reading each letter aloud while I listened and absorbed it mentally and emotionally, and we would jointly choose the statements that particularly resonate with us and excerpt these – see below. 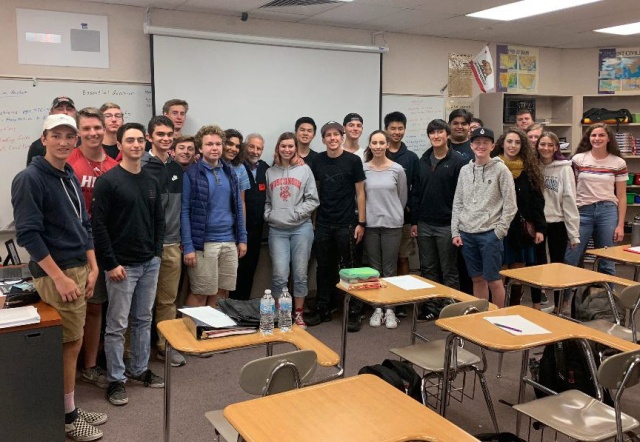 with Matteo, Mehta and Carson

with teacher Nick Jones and Sasha (thanks for the arrangements)

with Rachael and Lauren