Fenway High School is a unique Pilot school next to Boston’s Fenway ballpark.  Its stated mission is to create a socially committed and morally responsible community of learners, and its slogan is: “Work Hard.  Be Yourself.  Do the Right Thing.”  One of Fenway’s unique and key features is its humanities curriculum, which rather than using the traditional chronological format is taught instead as an interdisciplinary course on a 4-year cycle, with each year focused on an essential question that frames that year’s inquiry: 1) Who built America? 2) How do we govern ourselves? 3) What does it mean to be human? 4) How do you do the right thing in the face of injustice?  Another unique feature is how well this academic approach works, and works very well: student test scores, graduation rates and college admissions data are all above Boston and the state averages, and even more above other schools of similar demographics.

My presentation, arranged by Jan Darsa and Judi Bohn of Facing History and Ourselves, was to the 9th grade class of humanities teacher Meredith Hubbell, imaginative, empathetic, and focused on students’ active involvement: one pair of students met us at the front lobby and escorted us into the classroom, another pair presented me with a great gift (Fenway HS coffee cup!) after my talk, and a third pair escorted us out.  The next day she had the class discuss how the presentation impacted them personally and asked the students to reflect on the following: 1) What did you learn?  2) What will you remember? 3) What will you share?  The students’ responses, shown below, speak for themselves.

Thanks for a great memento: Fenway HS cup 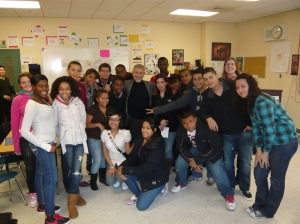 STUDENT  RESPONSES
What did you learn?
How the Nazis attacked people.
How he survived.
Jews weren’t the only people the Nazis killed.
Some Jews found safe places to hide from the Nazis.
That he didn’t call himself a hero.
That you should appreciate what you have.
There were people in the ghetto who tried to fight even with no experience.
That there were some good people who helped Jews survive the Holocaust.
I learned that people have stories to tell and it’s good to listen to them.
I learned how difficult it was for him and his mother.  He was very lucky, and that he is a strong man.
How bad life was back then and how it is best to remember the good stuff.
I learned what his mother had been through and had seen a lot of things no one should see.
How important it is that everyone has a story to define who they are.
I learned to appreciate what I have in United States because not many people have the chances we do.
I learned that even though it may hurt, it is good to share your story with the world.
What will you remember?
I will remember how many times he was away from his parents.
I will remember that 10 of his family members were killed by the Nazis.
I will remember everything.  Also how for every falling star a person died and he thought of his Dad.
I will remember how heartless the Nazis were.
I will remember what George went through growing up during the Holocaust and how lucky he is to still be alive.  I will also remember how hard it was for his Mom to work and keep him in a nice family.
I will remember from his story how there were so many instances where  he could have died, but he managed to survive.
I will remember when the German soldier looked at him and he wasn’t scared – he continued eating his soup.
I will always remember how emotional he got when he mentioned his father.
I will remember when I walked him out.
I will remember how he said that he thought his father could have been a falling star and how he thought of his father a lot.  I can kind of connect to that in a way, so it will always stay in my mind.
Six million Jews died.
When he threw the bomb over his shoulder and it landed in a ditch.
Times were very had for all who lived at the time.
Everything, and the sadness he felt.
What will you share?
I will share everything that happened in class, especially about his father.
I will share his book and his story.
My memories of his emotion, his mood, and how it changed throughout his talking.
That he was lucky enough to throw the bomb over his shoulder, which then exploded.
I will share everything.
I will share the great experience I had hearing someone’s story from the Holocaust and what it meant to me.  I will share that I got to introduce someone I revere.
I will share my story as well as his story because it has influenced me deeply.
I will share that I met a Holocaust survivor.
I am going to share that some people did escape, although 6 million Jews died – 2/3 of Jews were killed.
I will share that he called himself lucky and not a hero and that he got through because of luck.
I will share his story with others and let them know how someone survived the Holocaust.
.
LETTERS FROM STUDENTS
About a week after my visit I received a touching “thank you” note from teacher Meredith Hubbel together with letters from her 9th grade students.  I was truly moved by these letters, and their most memorable phrases are excerpted below.